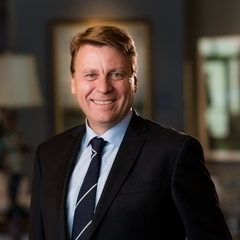 President and Chief Executive Officer
Tom Palmer became President and Chief Executive and joined the Board of Directors of Newmont effective October 1, 2019. He served as President since June 2019 and as President and Chief Operating Officer from November 2018 until June 2019. Previously, he served as Executive Vice President and Chief Operating Officer since May 2016. Mr. Palmer was elected Senior Vice President, Asia Pacific in February 2015 after serving as Senior Vice President, Indonesia since March 2014. Prior to joining Newmont, he was the Chief Operating Officer, Pilbara Mines at Rio Tinto Iron Ore. Over a 20-year career with Rio Tinto, Mr. Palmer worked in a variety of roles across a number of commodities, including General Manager, Technology for the Bauxite and Alumina business; General Manager, Operations at Hail Creek coal mine; and General Manager, Asset Management at Palabora Mining Company in South Africa. Mr. Palmer brings extensive experience leading teams and delivering production while implementing safety culture programs and improving diversity. He earned a Master of Engineering Science degree and a Bachelor of Engineering degree from Monash University in Melbourne, Australia.
VIEW PROFILE
Hosted By