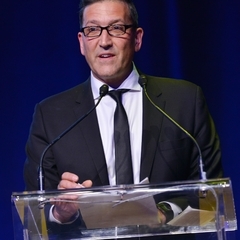 CEO
Mr. Salamis has over 30 years of experience in the mining and exploration industry. Mr. Salamis has been involved in over $1.4 billion of M&A transactions, either through asset sales or his involvement with junior mining companies. Mr. Salamis was most recently Executive Chairman of Integra Gold Corp. which was sold to Eldorado Gold for C$590 million. Mr. Salamis co-led the efforts behind the 2016 Integra Gold Rush Challenge and the 2017 #DisruptMining initiatives that encouraged innovation and technology disruption in the mining industry. Mr. Salamis holds a Bachelor of Science Degree in Geology from University of Montreal — École Polytechnique. Mr. Salamis has discovered, financed, built, managed or sold more than 5 major minerals deposits around the World. He began his career working for two major mining companies over a 12-year period before transitioning into mineral exploration in 2001.
VIEW PROFILE
Hosted By