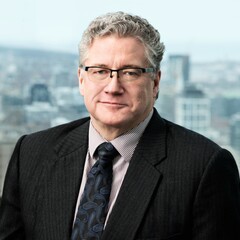 President & CEO
Gordon Stothart originally joined IAMGOLD at the end of 2007 as COO, moving to the position of President & CEO as of March 1st, 2020, bringing over 30 years of mining industry experience to the role. Prior to IAMGOLD, Gord worked in the Noranda-Falconbridge-Xstrata organization for 21 years in a number of operational, project, business development and management roles, including spending nearly 10 years in South America on large copper operations. Mr. Stothart graduated from the University of British Columbia in 1987 with a Double Major in Mining and Mineral Process Engineering and later completed a Falconbridge-sponsored Executive Development Program at the Pontificia Universidad Católica de Chile. He is also involved in several industry associations and is currently the Chairman of the Mining Association of Canada (MAC). Gord is also the current Chairman of the non-profit Saint Elizabeth Foundation with a current focus on end-of-life care and in-community healthcare training and service partnerships with several First Nations and Inuit communities in Canada.
VIEW PROFILE
Hosted By